Jonathan takes a picture of the day . . . everyday.  Here are his favorites from 2010 and why.

I took this shot in downtown Franklin at night. The frozen fountain looked awesome in person. I took 4 or 5 exposures at different shutter speeds and merged them together so you’d be able to see the details in both the ice and the fountain. 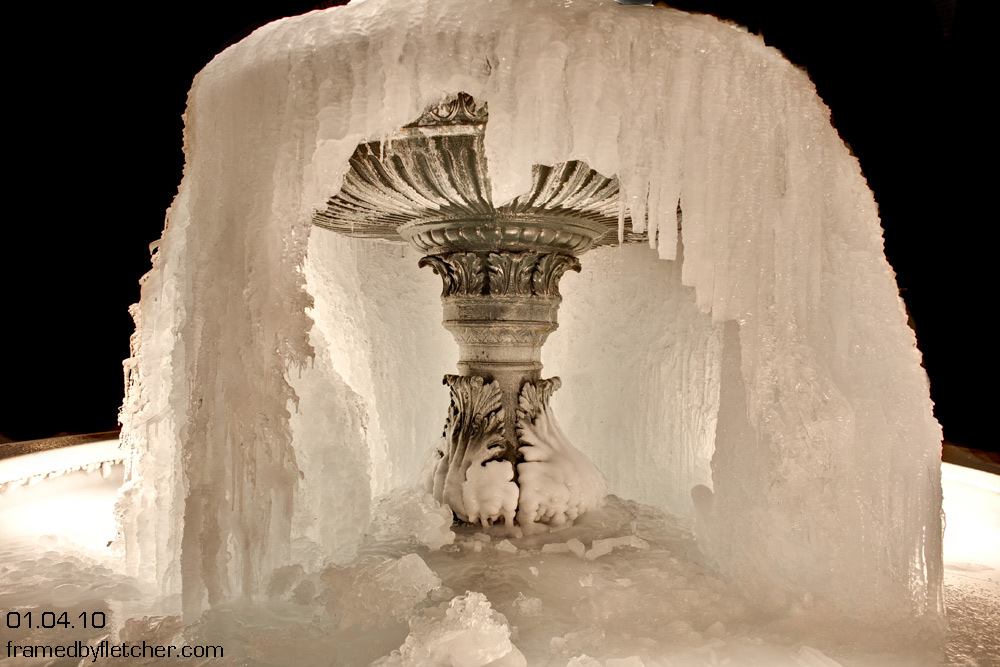 We had never lived in a place that got snow on a regular basis so when the parking garage outside our townhouse had a nice, even layer of snow on it I was excited to make this shot. 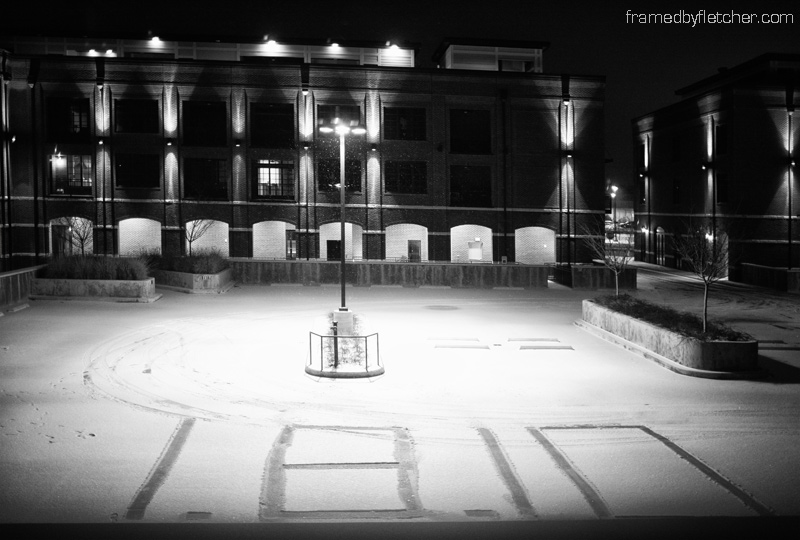 We started a new (to us) workout program last year called “crossfit”. We quickly fell in love with it and the results/feelings associated with such great workouts. I really liked this shot of Blakley doing a pullup, with an exhausted fellow crossfitter in the foreground.

We were pleasantly surprised by the energy and talent of singer/songwriter Serena Ryder who opened for Howie Day at 3rd and Lindsley in Nashville last February. She was quite animated and I love the motion in this shot.

I took this shot while we were in Houston visiting Blakley’s family. I believe this was shot with a 200mm f2.8 lens that I rented. There’s a lot I like about this shot. The bird frozen with his wings spread, the bird making eye contact with the camera, the bird seed falling to the ground all add to the interest for me.

My friend Curtis had me come out and shoot some photos of a plane that his flight school had recently acquired. On the way back to our cars after the shoot I noticed the golden light pouring into this hangar lighting up these great looking yellow planes. I was lazy and didn’t want to unpack my gear, so I shot this with my iPhone. I believe Curtis showed the photo to the owner of the planes who printed it out and has it on their wall.

I also shot this one with my phone as we crawled through a traffic jam in Nashville. I really like the colors, texture and the expressions of both of the guys in the shot.

I shot this one from up high on hill at our friends place in Spring Hill TN. We had a get-together with our church group at their place. They have an awesome area behind their house where we had a campfire. I think what I like most about this shot is the interaction between all of the people and the activity of the kids.

I shot these two shots within a second of each other on our front porch. I don’t think I even cued the dogs. It just so happened that they had the exact opposite pose in each.

I call this one the headless UPS man. I remember grabbing my phone to get this shot because I thought the light hitting him was awesome. It wasn’t till I got home that I realized his head disappeared.

I might be the only one who likes this shot. I shot this one by pressing my phone up against a “peep hole” that they had left open in the wall around the Franklin theatre in downtown Franklin. It’s being renovated and they were nice enough to give the public a sneak peak on the progress.

I shot this one while we were up in VA visiting my sister (Hi Sally!). They have this incredible man-made ski slope that can be ski’d or snowboarded without snow. We had a lot of fun watching these snowboarders jump. I only brought a 35mm lens with me, so you might have to squint to see the guy.

If you’ve met our dog Sandy, you’ll know that one of her favorite things in life is “hall ball”. I love this series of her chasing and jumping for her ball.

This past summer we spent quite a bit of time in the North Mississippi Hospital in Tupelo with Grandpa (He’s fine now!). This was my favorite “self-portrait” I took with my phone into one of the mirrored domes on the ceiling in the hallway.

I guess there isn’t too much special about this shot. I just love the tongue sticking out of the cat’s mouth and his expression.

I shot this one at Blakley’s Grandpa’s place. Every day around 5pm he goes down to the pond in the backyard to feed the fish. The light is nice that time of day and I really like the way the fish food is backlit in the air as he throws it out. It’s a very special place for us, and I love that Blakley and her cousin are in the foreground watching Art throw out the food.

On one of our last nights in franklin we got together to hang out with our friends from Church. We were lucky to have singer/songwriter Melissa Fuller in our group. She was kind enough to perform some of her songs from her upcoming album for us. It was super dark in the room and took a very high ISO and a very slow shutter to capture this photo but I really like it. I like the emotion on Melissa’s face and the way Scott is gesturing, focused on the music.